Are you not able to take your hands off from your head? Have you spotted a tiny, white speck in your hair? Then, I guess you’ve LICE in hair.

This four letter word is enough to make anyone panic. Also, lice infested hair score high on the yuck factor.

I don’t want to admit it, but even I had them when I was in high school and it was quite embarrassing and frustrating too. I used to shed tears and think of different ways to get rid of lice. However, I was able to knock them off with lice treatments at home.

In this article, I’ll try to explain everything I got to know about lice in hair and also debunk some silly myths related to it.

What Are Lice? (The Annoying Little Monsters)

The head louse (plural-lice) or Pediculus humanus capital is a small, wingless parasitic insect which lives in your hair and feeds on tiny amounts of your blood drawn from the scalp.

Lice are a very common problem, especially in kids. They’re annoying, contagious and sometimes tough to get rid of, but they aren’t dangerous. They don’t spread any disease, although their bites can make your scalp itchy 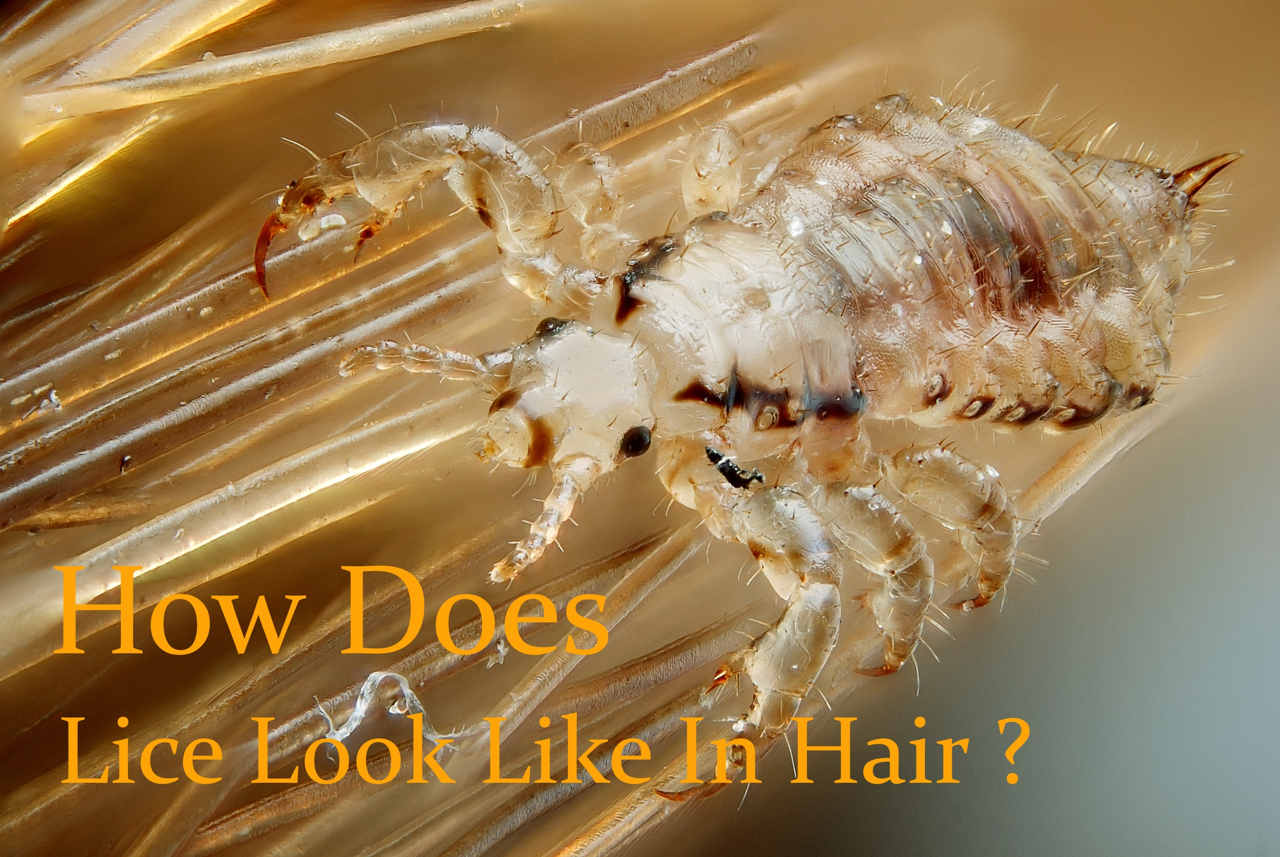 and scratching can lead to infection.

What Does Lice Look Like In Hair? Pearls? Naahhh.

There are 3 forms of lice in hair:

1. Nits:
The life cycle of head louse starts from nits. Nits are lice eggs in the hair that are attached to the hair shaft and hatch within a week. These microscopic eggs look sort of like dandruff or residue from hair styling products. Their color may vary from white to brown to tan. When first hatched, they’re smaller than the size of a pinhead.

2. Nymphs:
When the eggs hatch, an immature form of parasite that is grayish tan in color comes out of them. They’re called nymphs or baby lice.

3. Adult lice:
After 9-12 days, when they’re fully grown, nymphs mature into adults and are about the size of a sesame seed. The average size of adult lice is still tiny, at 2 to 3 mm.

According to South Orangetown Central School District, lice CAN’T fly, swim or jump (Thank God!) and are spread by head-to-head contact. They crawl from head to head only when they’re adults or nearly mature juveniles.

These pesky parasites have six legs with claws at the end and that is how they keep on clinging to hair.

Female adult lice stay pregnant for life and can lay three to four eggs every day. The eggs are laid right onto the shaft of hair and glued on by secretions from the female louse.

Also, after hatching, the remaining shells look white or clear and stay firmly attached to the hair shaft.

Lice In African American Hair: Do You Think Lice Are Racist?

Well, you’ve all the reasons to hate head lice, but at least they’re NOT racist.

Lice don’t give a damn whether your hair is thin or thick, smooth or coarse. They just want uninterrupted food supply that is: Your Blood.

A study has also confirmed African American hair is not resistant to lice in hair. Therefore, no hair is immune to head lice.

But, Black people can’t get lice as much as White people.

How To Tell If You Have Lice?

• Nits on the hair shaft:
Nits are tiny yellow, brown or tan dots before they hatch. Lice lay eggs on hair shafts close to the scalp. Because the temperature is perfect there for keeping them warm till they hatch.
It’s difficult to know if you have lice unless the infestation is heavy and live lice are crawling on the scalp.

• Adult lice and nymphs:
Well, this is the obvious sign of lice.
Nymphs are smaller than adult lice and become adult about 1 to 2 weeks after hatching. If you don’t treat head lice, this process will repeat itself about every 3 weeks.

• Intense itching:
Head lice cause no symptoms in many people, but if your scalp is itching like hell, then chances are that you’ve dandruff or lice. 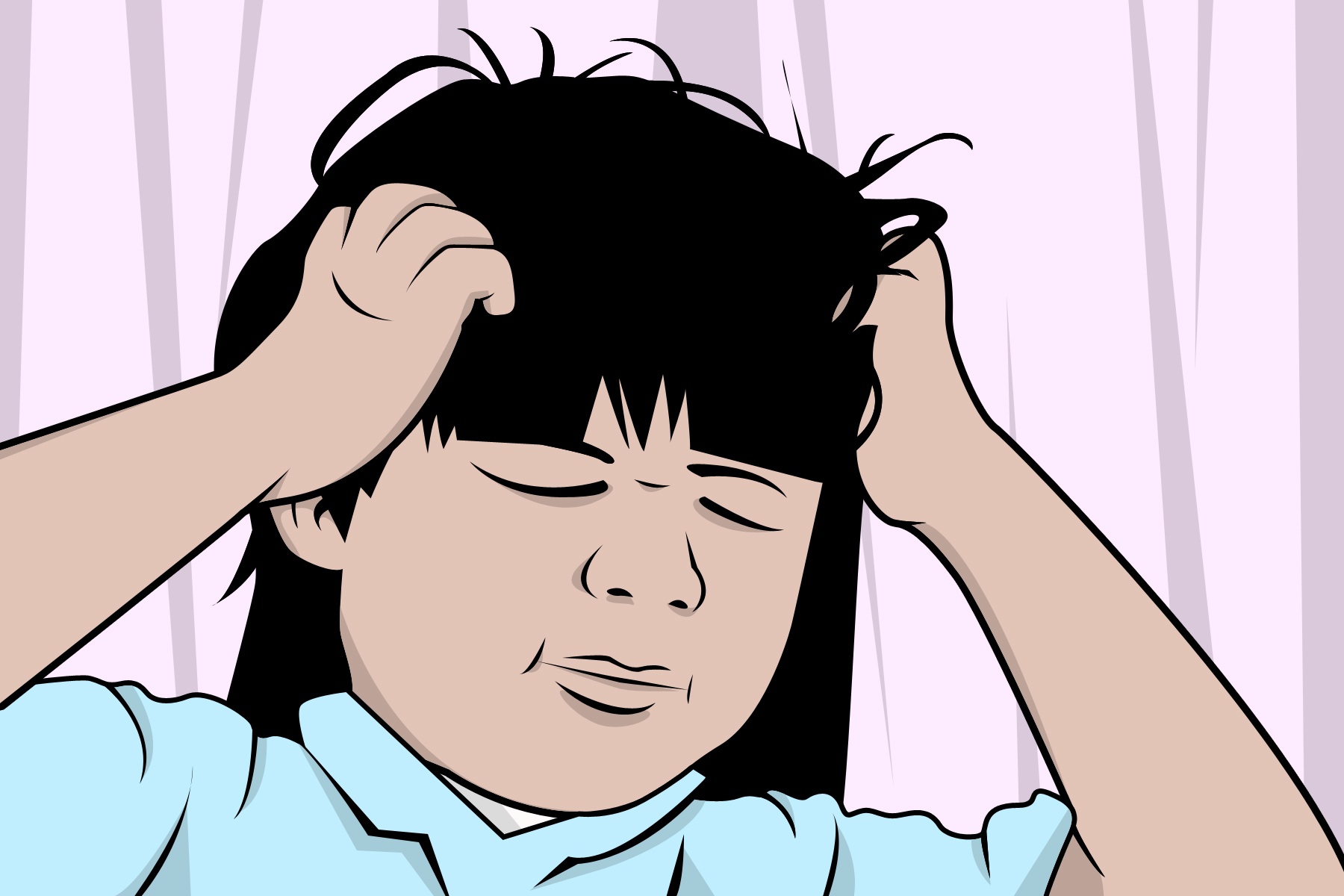 • Sores on the head and neck:
Very tiny red areas or sores might be seen on the scalp due to the louse bites. They may develop from continued scratching and itching.

Mostly, lice infestations don’t lead to infections. But, sometimes these sores become infected and a person might develop swollen glands under the arms or in the neck.

ALERT: Immediately contact your doctor if you think a sore has become infected.

• Sleeplessness:
If you’re not able to sleep at night that doesn’t mean you’re in love or insomniac, head lice can also disrupt your sleep.
As the lice are more active at night or in dark, difficulty in sleeping can also be a sign of lice infestation.

• Feeling of something moving in the hair:
Do you feel as if something is crawling in your hair?
Then, unfortunately, you might be having lice as this is another symptom reported by some people.

Where Does Lice in Hair Come From?

Research published in PLOS Biology suggested that one of the types of lice, a “worldwide” species, came into existence first.

The species of lice in hair Pediculus humanus which affects modern-day humans come from two different lineages of parasites. Around a million years ago, a newer clade diverged from “worldwide” species and was confined to North America.

A clade is a group of organisms that are not genetically identical but share a common ancestor.

This divergence of two species mirrors the evolution of human species from Homo erectus to Homo sapiens roughly at the same time period.

How To Get Rid Of Nits And Hair Lice?

If you or your child has head lice, then don’t freak out. Just take a deep breath!!

Sure, they’re disgusting (just mentioning their name can make your head itch), but they aren’t harmful to health.

Years ago Albano Krosche used to spend hours on extracting nits and lice by hand from her daughter’s hair.

Treat Lice At Home To Save You From Embarrassment:

STEP 1: Comb wet hair section by section with a fine-toothed comb, which is easily available at your nearby drugstore, to remove lice and nits.

STEP 2: After comb-through, use a magnification light to find and pick out any lice, which is left.
STEP 3: Once the comb has run through a section of hair, clean off the comb in a shallow bowl filled with water and dish soap. After that, wipe it dry using facial tissue to remove any lice or nits that have clung to it.
STEP 4: Keep on repeating this process until you’ve combed through all of your hair.
STEP 5: Wash your hair again to feel cleaner.

P.S: No matter what kind of lice-killing product you’ve used, the combing is the key. You can’t eradicate lice completely until you’ve picked every last egg.

If you’re lucky enough, then hair dye and bleach might kill nymphs and adult lice in your hair. Or you’ll be left with colored head lice. As till now no study has been able to prove that hair dye kills lice. The chemicals in some brands of hair dye are toxic for these little critters. 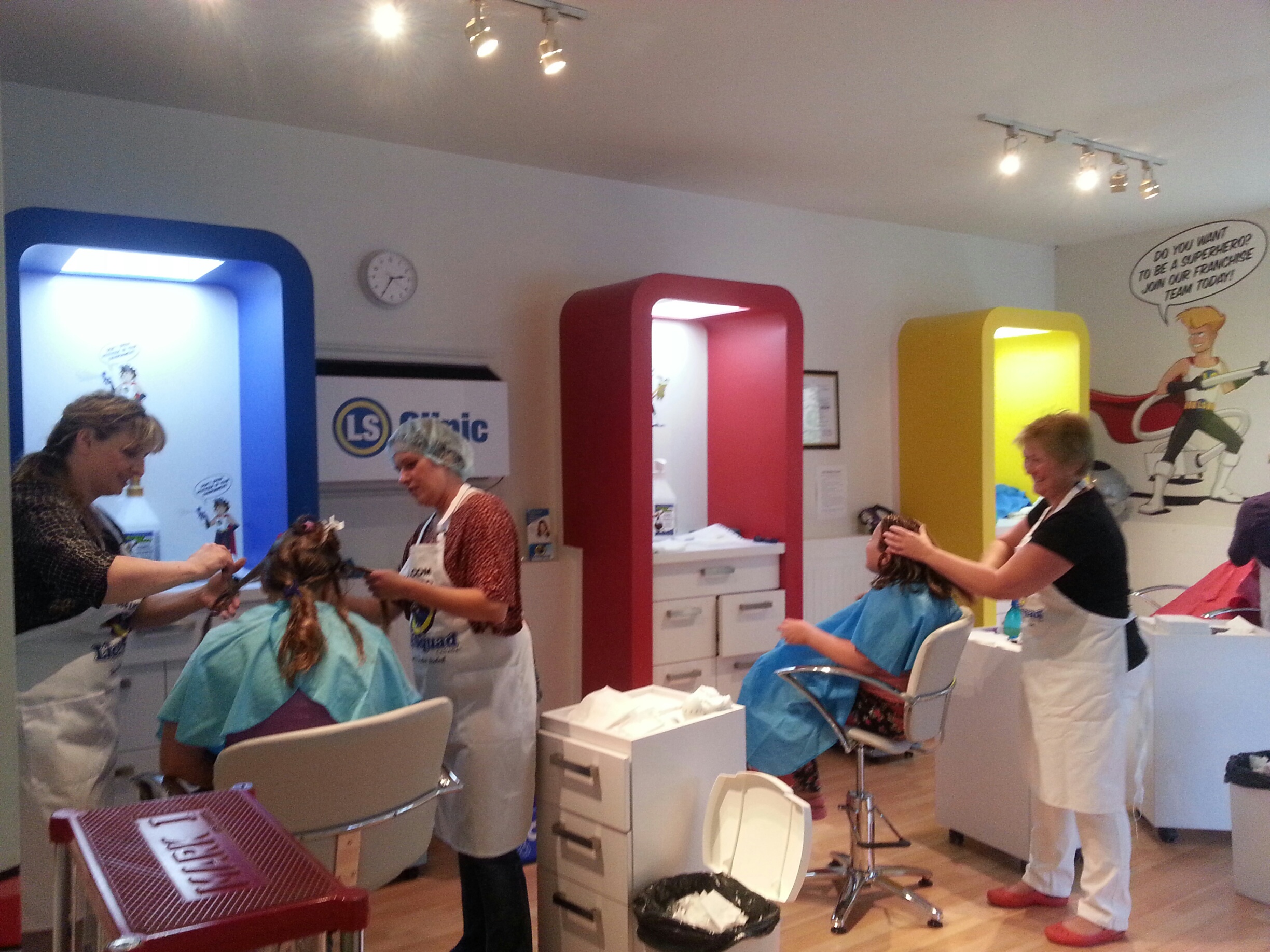 However, dying your hair generally doesn’t kill lice eggs because the chemicals can’t penetrate the shells of the eggs.

Also, there are no studies to show that such treatments actually work or not.

Detecting head lice is a taxing task. The worst thing is that lice have become resistant to the OTC stuff. But, if lady luck smiled on you then home remedies for lice in hair will cure this nuisance for good.

If you’ve benefited from this article, then be a good friend and don’t shy away from sharing it with your friends who have lice. 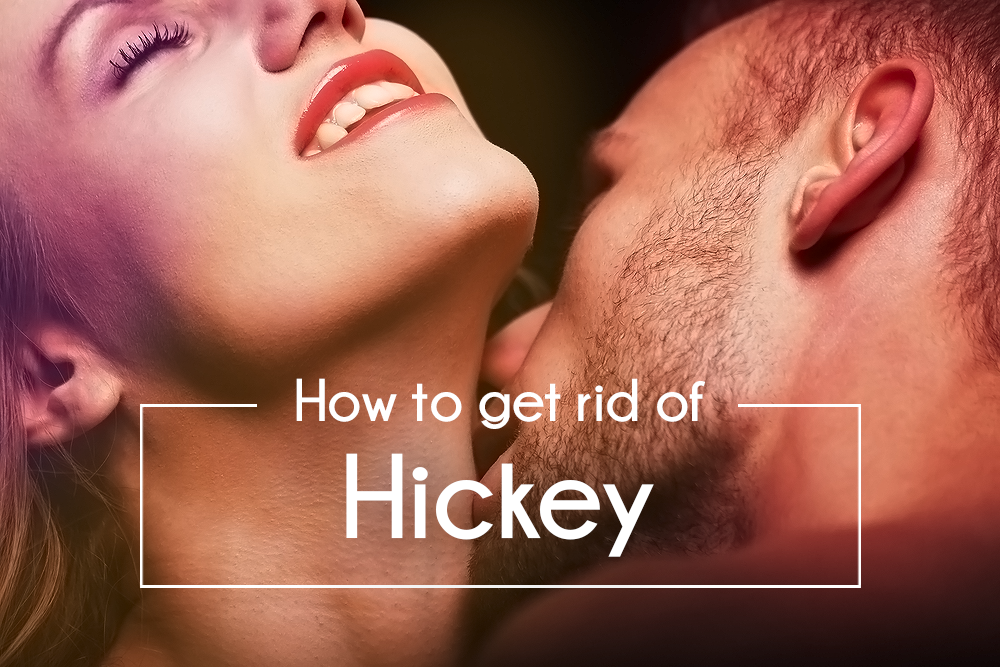 10 Easy Time Tested Ways To Get Rid Of Skin Tags 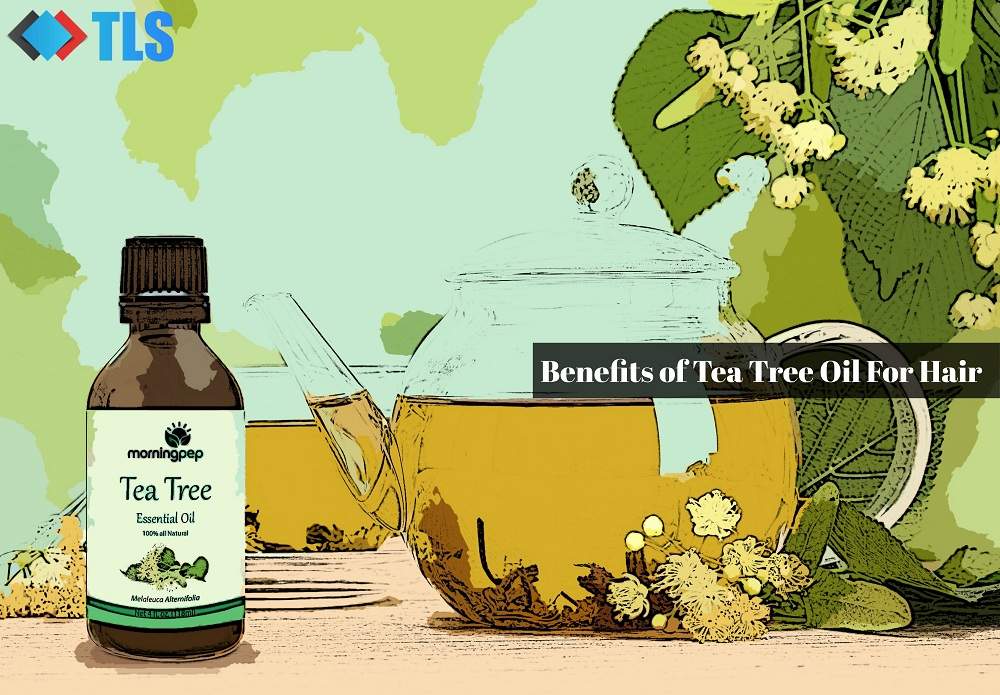 Unraveling The Benefits of Tea Tree Oil For Hair